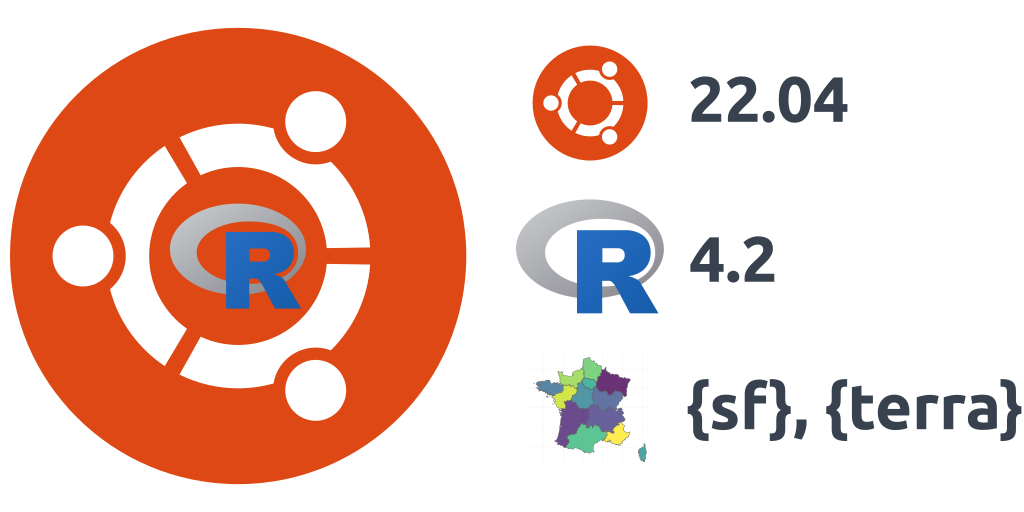 It is again this time in your Ubuntu user’s life where you plan to upgrade your server installation from Ubuntu 20.04 to Ubuntu 22.04 LTS. Indeed, the first point release 22.04.1 is now there, and you’d like somebody else to try it for you before loosing all your work. Let me do it for you ! We will also use R 4.2 by default. Also, like every two years in this blog post, I’ll give the tips for geographical packages installation on Ubuntu. Just follow the guide…

Last time you read this kind of tutorial on our blog was two years ago to migrate to R 4.0 and Ubuntu 20.04 LTS. Note that I am writing this guide to be able to upgrade my own in-prod laptop. This has to work properly !
Also, everything is proposed through command lines, which means that you can use this tutorial to upgrade a server with no graphical interface, to build your Docker containers or set up the continuous integration of your package builds. Note that we can help through this process of R-server installations, Docker or CI set-up.

This year, I will first realize the upgrade from Ubuntu Focal to Ubuntu Jammy inside a Docker container, so that I can write my blog post along with it. I’ll upgrade my own laptop just after that.

You only want all the command lines in one place because you already followed my previous ubuntu with R migration blog posts in the last four years and you trust me blindly ? Okay !

After all these bash commands, open R and upgrade all packages

If you use Ubuntu on your laptop or on your servers in your company, chances are high that you use a Long Term Support (LTS) version. Using a LTS version is safer for companies having stability constraints. This avoids possible breaking changes that would compromise your workflows and thus your business. The first release of Ubuntu 22.04 Jammy Jellyfish for server or desktop is available for download. If you are still using Ubuntu 20.04 you may be proposed this upgrade now.

As always, be sure to have some backups of your files before starting migration !

You really want to jump? Then, let’s go ! Be sure the manager is installed :

You can also make a little clean-up.

This should work if you allowed only LTS versions to be installed, and after the first point release 22.04.1, expected on August 4th, 2022.
If the upgrade is not already available, and you do not want to wait, you’ll need to upgrade through the development releases with:

Be careful with this change. If you are using you computer for work in production mode, set it back to “lts” as soon as you have the LTS installed. However, for server in production, I would recommend waiting for the 22.04.1 release, early August 2022.

To be able to use R 4.0, you will have to delete everything about the previous R version.
With the release upgrade, chances are Ubuntu already de-activated the repositories. Although, recent version try to re-activate them after the upgrade.
We first need to check if you used one of the R mirror server. Maybe you do, maybe you don’t… The R mirror server will be one of these : https://cran.r-project.org/mirrors.html.
The name of this server can be listed in the file “/etc/apt/sources.list” that you can edit with:

Find the line(s) that looks like deb https://mirror.ibcp.fr/pub/CRAN/ focal/ and comment it with a #. Similarly, if you followed our post “migrate to Ubuntu 20.04 and R 4.0”, you probably added the main mirror of CRAN deb https://cloud.r-project.org/bin/linux/ubuntu but also maybe the Ubuntu binaries provided by Michael Rutter on the “c2d4u” Team PPA that looks like deb http://ppa.launchpad.net/c2d4u.team/c2d4u4.0+/ubuntu focal main. Comment all these lines with a #.

Note that to use the * for partial matching, you need apt-get, not apt.

Detailed installation instructions are on https://cran.r-project.org/bin/linux/ubuntu/. Thanks to Dirk Eddelbuettel and Michael Rutter, installing R on Ubuntu is a child’s play !
We will use mirror https://cloud.r-project.org, which will automatically redirect to the closest CRAN mirror.

On a personal level, I have some R packages installed with an Ubuntu PPA (Personal Package Archives) because I trust maintainers and I am sure these R packages will work with my Ubuntu distribution. They require Linux dependencies that can be complicated to install. This is the case with packages for cartography or those with java in them.
Michael Rutter prepares for us ready to use binaries installation of your prefered R packages on a PPA with the “cran2deb4ubuntu Build Team”. More explanations on these binaries are available on his blog post: “R4.0 now available”. Hence, you’ll need to use his PPA before installing Ubuntu packages for R (starting with “r-cran-”). Note that it is the same as for R4.0.

Here is my own selection of packages you may not want to build yourself from source and let Michael do it for you.

Installation of R packages like {sf}, {terra} … may require some external Ubuntu packages for softwares like PROJ, GDAL or GEOS.

If you want to play with {rgl} and {rayshader}, you may also need the following:

If you want some extra system dependencies for image manipulation, you can install the following:

At ThinkR, we use pre-built Docker containers to give R training on our BakaCode platform, so that attendees do not struggle with installations and directly start their course by writing their command lines in R.
Hence, we do have a configuration file with all Ubuntu system dependencies we need for our tutorials that you can find our on GitHub account there: https://github.com/ThinkR-open/installR/blob/master/bk-config.sh

On my personal StatnMap blog, I wrote a blog post as an Introduction to mapping with {sf} & Co.. There are enough examples to test the correct installation of R and your spatial packages. The code is available on GitHub, so just run the following lines of code and that’s it:

Set up a Docker container with the new Ubuntu version

Because I only have one computer for production, I must admit I first tested all the steps in a Docker container. Then I upgraded my own laptop.
I trust Ubuntu developers enough to know that the upgrade from Focal to Jammy will be ok. I now need to see if I can use R and spatial packages properly on Jammy.

I thus start with a raw image with Ubuntu Jammy on it, and execute code inside the container using VSCode.

Then, I tested all the command lines of this blog post. 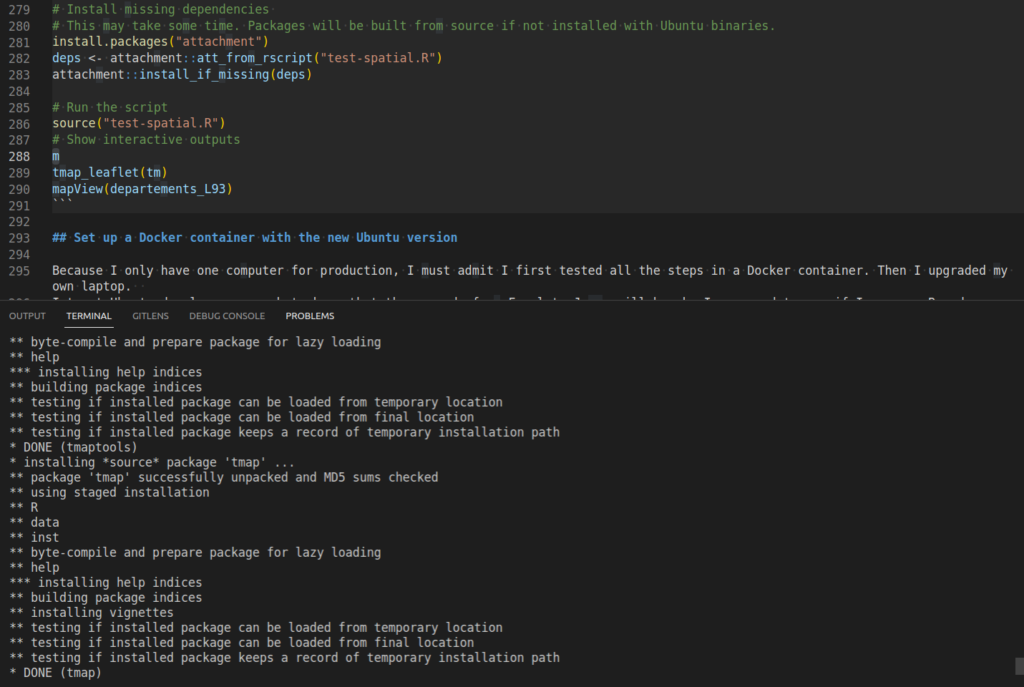 Note that you can also start from the Rocker images, like “rocker/rstudio” image from DockerHub, which contain a RStudio where you can test your configuration.
However, the current version is still focal and the devel version of rocker images use Ubuntu latest, which is not Jammy anymore, hence, I cannot use rocker to test R on Jammy myself, but you can test the installation steps for the future version of Ubuntu.

Here, I used the following options:

If you need help for your R server installation and deployment of packages and shiny application or courses in advanced R and spatial data manipulations, you can contact the ThinkR team. 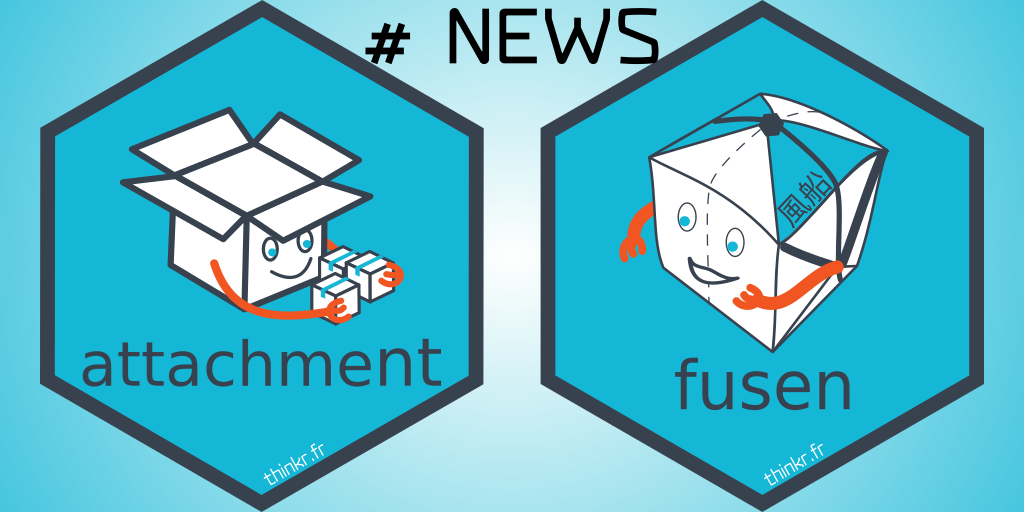 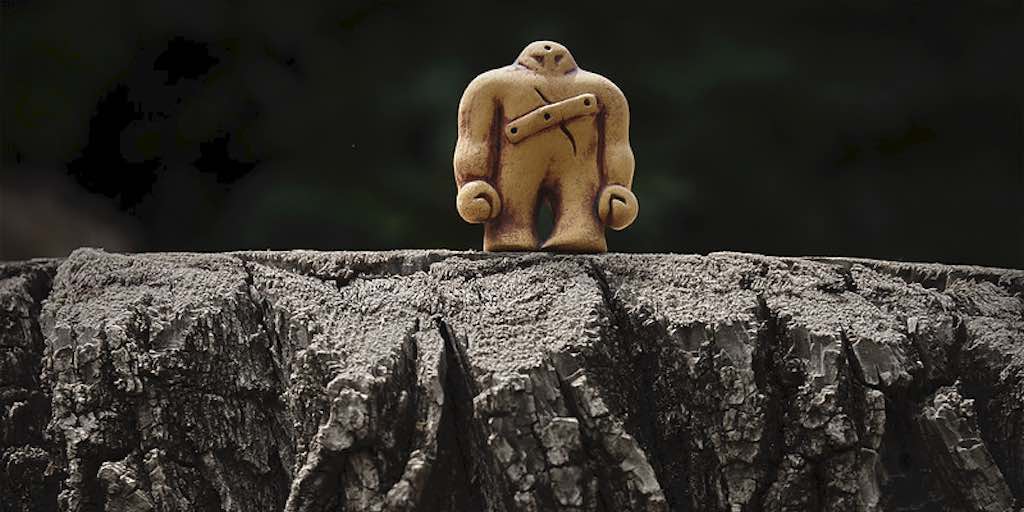